Just happy to be back in triathlon races 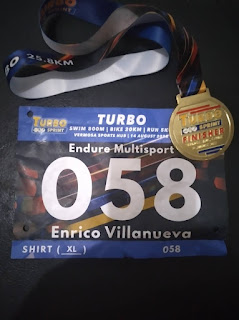 I had a choice of doing short and easy (flash distance) or the regular sprint. In separate triathlon leg simulations, I made it a little below required cut-off times, so I optimistically registered for the sprint distance. My weight loss has been at glacial pace, but I figured I was making decent progress in my runs, I can rely on my relative comfort in swim, and work the bike endurance during training.

I was calm but slightly excited for the race start. I was taking in race atmosphere. Plan for the swim leg was to go very easy in the first 100 meters and pick up pace thereafter. That has been my training and that gave me at least five minutes time buffer before swim cut-off. On pool training, the worst pool time I've had where I exerted the least effort all-throughout was still within cut-off time.

For some reason that day, I felt off even after 100m. Do I need more time to warm up? Is this similar to my 2019 aquathlon experience where I felt drowning even if I know how to swim? Was I taxing my heart already? I did not feel the drowning feeling but it seemed like I was not exhaling completely. I can complete the 50m laps, but I rested a couple of seconds more each lap. I forced myself to exhale more volume and more frequently underwater. It eventually worked, but those rests between laps and the intentional slowdown cost me time. I finished the first 400m slightly above 20 minutes or the beyond cut-off pace.

I figured I normally do negative splits in swim, bike and run legs, so I was still optimistic. I was feeling better in the last 400m, but maybe I was still too tired or cautious that I exited the pool a few seconds after the required 40 minutes. I was dejected but relieved that the marshals did not prevent us from continuing the race.

I was out of the transition area before 45 minutes. I thought I had everything planned and prepared in my triathlon bag, but I still forgot to the move my race snacks (biscuits) from one bag to my race bag. I left the snacks inside the car and realized it only after the swim. Good thing I did eat a plateful of pancit for breakfast. I was worried if that was enough for more than 2 hours of biking and running, but I soldiered on. Gameplan was to stop if hypoglycemia threatened to manifest itself. I must rely not on race nutrition but on the fats I have and the sugar/carbs I consumed for breakfast. This can be sustained only if I spin on the bike and run steadily. 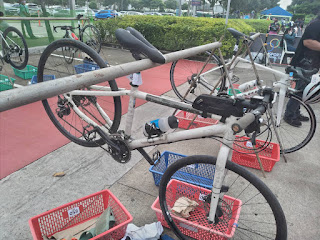 By grace of God or his miracle, I did not have hypoglycemia attack. The spinning not only helped in regulating my sugar cycle, it also increased my bike pace, faster than any of my training paces. I was able to exit the transition 2 with slightly more than an hour to complete the run.

I was still worried about hypoglycemia at the run start. How far can I extend my body sugar? I tried to do quick cadence but minimal effort running. Surprisingly, while I started slow, I was picking up pace every kilometer. I thought I could finish the run leg in an hour, or just slightly slower than my 5k run last Green Run in July. I was even running faster than my training pace in my last kilometer. It was a bit of a downer that the run was longer than 5km in my Garmin watch, by at least 250m considering that I was late to tap my watch for the run start. I probably run a minute or two above an hour with the extended distance.

I was a bit disappointed my official times were not recorded in the results. I was technically not a finisher because I was beyond cut-off time. Still, I wished my times were still recorded and just shown as DNF or some equivalent. Nevertheless, I am grateful for the organizer for allowing me to still bike and run despite my slow time in the swim leg. They still allowed me to cross the finish line, have my picture taken, and gave me the finisher medal. The main point of me joining was to swim, bike and run with fellow triathletes.

When I was interviewed by GMA Digital after the race, they asked how was it soldiering on despite being the last finisher/triathlete. I said I have done longer races, but I have had heart problems. I joined to get fitter and I have no problem being last. Like my blog name By Sheer Will and my team name Endure, I am going through the race legs by sheer will and God's grace, and enduring everything to slowly reclaim my fitness. 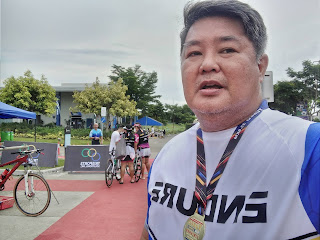 Slide and Glide in the Water 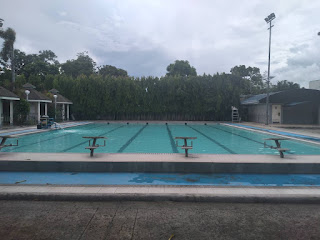 I went yesterday to Trace College compound in Los Banos, Laguna to do swim time trials in a 50-m pool. Alas, its Olympic size pool is closed (used only for special competitions) and the only pool open to the public is the 25m one.
I have been doing regular swims but I have not been timing my speed. I was focused on relaxation and fitness on those swims. I am aware that I am past the gasping stage experienced by those who have not swam for some time, but I still do no not know if my swim time is within the required 5 minutes per 100m to beat cut-off time.
First 100m was a super relaxed one. Time: 4:51
Second 100m was a bit faster but still easy. Time: 4:32
But can I already sustain that pace for 800m? I thought I needed to swim faster per 50m and have some quick recovery gasps in between during the actual race. A 4min pace would give me more comfort and assurance.
I decided to do 50m x 16 times. Every 50m lap must be done below 2minutes.
1st 50: 1: 57
(had to go out and buy food because I could feel my sugar level falling down)
2nd 50: 1:52
3rd-9th: 1:47ish
10th: 1:45
14th: 1:40
15th: 1:35
16th: 1:29
The best part is that I was swimming faster in the latter intervals not by producing more power (I keep hearing my doctor saying "moderate exertion only") but by streamlining myself and swimming more efficiently. I pictured myself sliding and gliding in the water.
1min30sec per 50m or 3min/100m is my usual pace for half-ironman swim from years ago.
I just hope to swim 4min per 100m for the Turbo Sprint Tri. So help me God. More swim intervals in the coming days.
at 5:35 PM No comments:

Back to Foot Races with Green Run Vermosa 5k

My first foot rate after the pandemic restrictions was The Green Run at Vermosa last July 3, 2022. I chose this race because the venue was near my San Pedro home and the race advocated sustainability.

I registered for the 5km distance as that was the most I could do given my current fitness level. Last May, I resigned from my work as Chief Risk Officer of a foreign bank branch to focus on my health. The pandemic in general and my personal bout with Covid 19 at height of the delta scare have a way of making people reassess personal priorities. Health comes first, and no amount of money, influence or prestige can make up for poor health. I was at a juncture where stress is wreaking havoc on my sugar and cholesterol levels, putting me at risk for diabetes and heart problems. I chose freedom to focus on my health.

Prior to July 2022, I have been doing regular walks almost daily at an average of 2-3kms. I rarely jogged or ran though as I was still very heavy. Since my resignation, I have significantly improved my sugar and cholesterol levels, but I have lost just about 5 pounds in two months. I joined a foot race to ramp my weight loss journey.

In June I slowly started jogging, beginning with 100m and slowly progressing with constant heart rate monitoring. I eventually graduated to doing rounds of walk and jog in the UPLB oval/field. Slowly, my average moving pace fell from 15min per km, to 14mpk, 13mpk, etc. To finish the 5k race within an hour, I needed to run an average of less than 12mpk.

In the last rounds of my tempo runs I was already running below 12mpk. Conditions before the race though posed personal challenges. For two days before the race I tried brewing coffee myself (I am not regular coffee drinker) and that wreaked havoc on my metabolism and body clock. I felt like a zombie the last two nights before the race with less than 3 hours of sleep. The day before the race, I only had an hour of actual sleep.

For the first 1km of the race I just dragged myself like a zombie. I walked. On the second kilometer, I added some slow jogs. It was only in my 3rd kilometer that I got my groove back and my body remembered the training I've had. I was already hitting less than 12mpk and progressively getting faster in the last 3 kms. My negative split failed to deliver my target 55 minutes finish time, but 58:50 was okay given my circumstances.

More than the finish times, I was just happy to be able to actually run again, join races, immerse in the experience of running with others, and get to see familiar faces. I saw several friends, including my teammate Tracy from Endure. Thank you Lord! 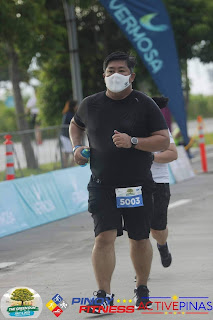 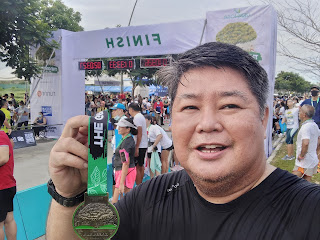 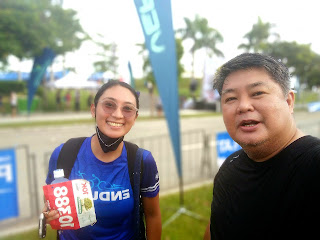 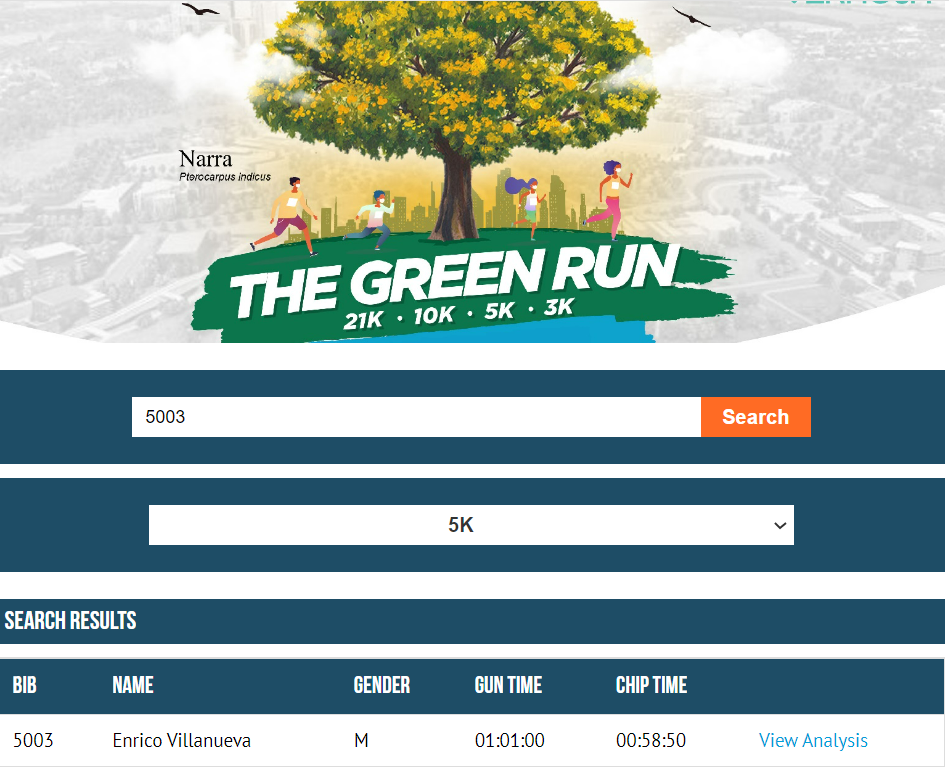