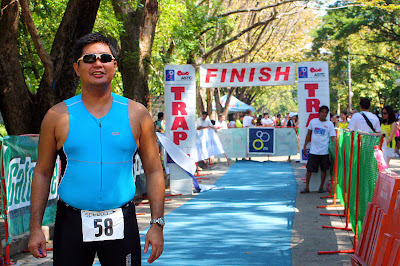 Pare, welcome back, and welcome to the neighborhood! Hope to bump into you doing uphills along Julia Vargas and St. Martin! :)

great story rico! congrats on your PR! :) you'll surely get those two in longer distances! :D

Rico, I'm very grateful that you are always present during trainings giving us tips & techniques. I know you were not in the best condition coming from you Camsur recovery. I did not hit my time goal due to a mistake in hydration. Maybe next time. (Actually si Tim inuunahan ko, hahaha!)

Julius, yup, hope to see you too on those damn killer hills.

Hey Marvin. My most formidable opponent is really myself. Haha. If I do get beaten by others, I would like if I get beaten by friends. Hats off to my two friends.

Neil, thanks for the kind words. Truth is I get my fire equally from those speed demons in constant pursuit of faster times, as well as newbies like you full of determination and enthusiam to improve. So thank you as well. Let's keep chasing one another so we all improve.

First and foremost, I would like to thank you for the following:
1. coming up with your informal tutorials with newbies wanting to explore multisport, be it through swimming, biking, or combining all of them in one.
2. for being the first informal coach of the newbies (together with Pio & Rey Jose)
3. for being a good friend :)

Secondly, I would like to thank you for being the role model that slow and steady wins the race :) You have always been consistent in all your trainings, and we all are witnesses to your being Mr. Consistent.

Lastly, I would like to thank you for wearing a bright blue (endure-ish) colored tri-top :) without your brightly colored top, i wouldn't have been able to spot a formidable fellow who would push me to be my best, even for that last split seconds towards the finish line :)

Until next time (hopefully, i get to train more with you guys in the longer distances).
I still have a lot of chlorine and saddle time to spend with you guys to be able to compete with mamaws like you :)

congrats on your PR and for raising the benchmark for us newbies!

congrats, SW! kras-able ka pa din! thanks for being an inspiration to us.

panalo manok ko! hahaah! very sly of tim to have snaked thru you on the finish line. hehe! =)

Congrats, Rico! :)
Congrats on the PR! You keep getting better and better, and keep inspiring us newbies to train smarter, race better and in the process do well in other aspects of life, too!

On another note, haha, I was betting on you (you vs. Neil). I owe Ronald breakfast (or siguro lunch na yun) after WRT. Haha. :D

looking good sir.. keep it up..